We have been working with a 25 yo male with h/o keratoconus OS>>OD s/p CXL. He found us online looking to see if he can improve his vision with scleral lenses. His vision with his glasses was 20/30 in the right eye and 20/400 in the left eye. He was also having problems with night vision. 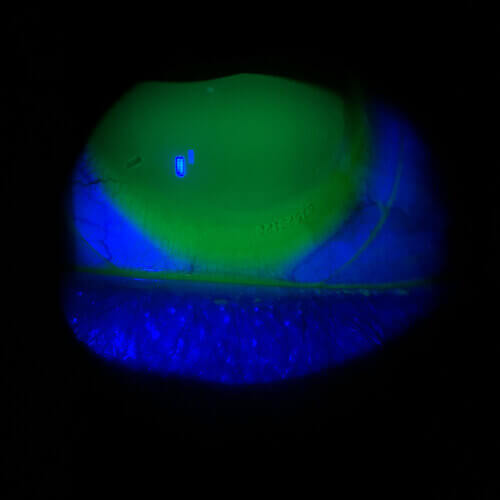 Despite multiple changes, there was still excessive seepage into the 12:00 and 6:00 position, indicating a large amount of scleral toricity.

He was first fitted into the ZenLens and was able to achieve 20/20 vision in the right eye and 20/30 vision in the left eye with significant improvement in his night vision. Unfortunately, he was experiencing significant redness nasally and temporally. After several designs of increasing the haptics and vaulting over the pinguiculas, he continued to experience injection after an hour of wear. Due to the limitations of non-custom scleral lens designs, we recommended a custom Latitude lens in order to reduce the redness. When we have to make alterations to the lens design more than 2 times, we will often times switch designs completely. 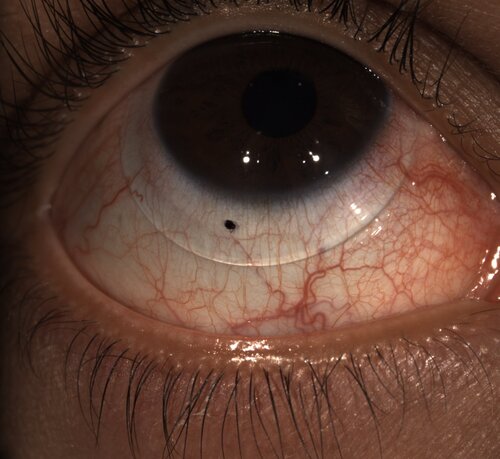 We refit him into a custom scleral lens, which fits his eye much better than the traditional scleral lens.

After imaging him with the sMap3D, we found that he had a scleral toricity of almost 400 in both eyes! The average scleral toricity is about 150-170 which can help explain the nasal and temporal redness he was experiencing with the previous scleral lens.
With the Latitude lens his redness significantly improved, only noticing a mild amount at the end of the night. In addition to the improved fit, he was able to achieve 20/15 vision in the right eye and 20/20 vision in the left! We are so thrilled that he is doing so well!

Next: What are custom scleral lenses?